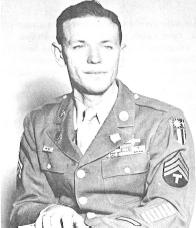 Placed on the inactive list until the National Guard was mobilized on November 25, 1940. Trained at Decatur National Guard Armory and Camp Bowie, Brownwood, Texas. Maneuvered in and around Brown­wood and Louisiana during the months of August and September 1941, as a Radio Operator, First Fourth Rating.

Returned to Camp Bowie about September 15, 1941. On November 9, 1941, left Camp Bowie by train for San Francisco, California. In San Francisco, was stationed on Angle Island until being assigned to overseas duty. November 21, 1941, shipped out of San Francisco on the USS Republic, and old troop trans­port which had been used in World War I, for destination PLUM (code name for an overseas station unknown to me).

Circumstances of war took me to the following places: Honolulu, Hawaii … eight days out, Pearl Harbor was bombed. We changed course and went to Suvia, Fiji Islands. We docked in Suvia long enough to refuel and take on supplies; afterward, we sailed to Brisbane, Australia. After a week in Australia, we boarded a Dutch ship, Blumfontang, and went to Port Darwin, f:\ustralia, and on to Surabaya, Java. From Surabaya, we traveled by train to Malang. Then we were transported by truck to Bandong, Buttonzord, and Garvett. When we reached Garvett, Java, we were informed that the Island had capitulated.

We were taken prisoners of war by the Japanese Imperial Army on March 8, 1942. First, we were im­prisoned at a race track; then they moved us to a tea plantation on top of a mountain. Later we were trans­ferred to the side of the road close to the railroad tracks which led to Batavia, Java. We went behind barbed wire for the first time in a camp called Preact, on the 1st day of April 1942. Around May 1, 1942, we were moved to another camp in Batavia, named Bicycle Camp. In November 1942, we left Java on the ship

Di Nitche Maru and went to Singapore. In January 1943, we were shipped overland by rail in cattle cars, from Singapore to Penang, Malay. There we boarded a ship called Di Moja Maru to Maulmein, Burma.

In Maulmein, Burma, I became ill and was moved by train from the old Maulmein prison to a supply camp and hospital which was located in Thanbyuiayat, Burma. Later I went to work on the Death Rail­road at Camp 18, 85, 80, 100, and 105. In March of 1944, I was moved to Tamarkan, Siam; then back to a supply camp in Kinsia and finally to a wood cutting camp, Tamajo, close to the border of Burma and Thailand. On August 1, 1943, the Japanese moved a small detail of men, to which two other Americans and myself were attached, to a camp in the jungle unknown to me.

When the war was over, I was released from POW camp on August 14, 1945. I was flown from Pep­berry, Thailand, to a hospital in Calcutta, India, and from there by a C-47 plane to Karachi, India. Then from India to Iran, to Cairo, Egypt; to Libya; Casablanca; Morocco; Azores; Newfoundland; New York, N.Y., USA on a C-54 plane, and stationed at Staten Island Hospital.

In October 1945, arrived by train at McKinney, Texas, Army Hospital, and then I received my first pass home, which was in Decatur, Texas, thus completing my trip around the world. 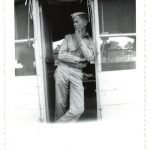 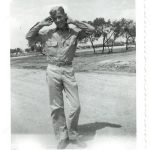 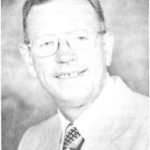