There is no meaningful way to acknowledge the men of the Lost Battalion without also honoring their POW campmates that survived the sinking of the USS Houston (CA-30).  Their collective history is aptly described on a plaque at the Thai-Burma Railway Museum in Kanchanburi, Thailand:  “Became like brothers in captivity, brothers ever since”.

Originally a Northhampton-class light cruiser commissioned in 1930, the USS Houston was carried by President Franklin D. Roosevelt on numerous overseas trips and personal cruises prior to WWII.  In November 1942, the USS Houston became the flagship of Admiral Thomas C. Hart, Commander of the US Asiatic Fleet.  Following the Japanese attack on Pearl Harbor, the USS Houston joined the American-British- Dutch-Australia (ABDA) naval force at Surabaya, Java.  The Japanese navy claimed to have sunk the USS Houston several times, but the ship nearly always managed to escape and fight in other sea battles, earning the nickname “Galloping Ghost of the Java Coast”.

In February 1942, the USS Houston, sailing with the HMAS Perth, the HMS Exeter, the HNLMS De Ruyter, HNLMS Java, and ten destroyers engaged in the Battle of the Java Sea.  Several of the ships were sunk and others, including the Houston and the Perth, were ordered to return to port at Batavia, Surabaya, and Tanjong Priok. Finding limited supplies in ports, the USS Houston and the HMAS Perth set sail for Tilatjap, on the south side of Java, via the Sunda Straits.

Unbeknownst to the crews of the Houston and Perth, a force of 12 Japanese naval ships (including two heavy cruisers) assembled near Bantam Bay in support of troopships that were offloading thousands of troops engaged in the invasion of Java.  The Japanese navy quickly mobilized to attack the two ABDA cruisers.  Dodging many torpedoes and low on ammunition, the Houston and the Perth inflicted heavy damage to the Japanese navy in the Sunda Straits before finally succumbing to overwhelming damage shortly after midnight on March 1, 1942.

The USS Houston carried a crew of ~1,050, plus a detachment of 74 U.S. Marines.  Captain Albert Rooks was killed during the Battle of the Sunda Straits when an enemy shell burst on deck.   Only 368 men survived, 24 of them from the Marine detachment.  Those that survived were plucked from the sea by Japanese patrol boats or captured after they swam ashore on the beaches near Bantam Bay.  Captives were marched to Batavia and eventually ended up in the same POW camp with men of the 131st Field Artillery at Bicycle Camp.

With some exceptions, Americans from the Army, Navy, and Marines were generally imprisoned together and worked alongside each other on the Burma railway. Owing to the strong bonds they established in POW camps, the men collective enjoyed membership in both the USS Houston Survivors Association and the Lost Battalion Association.  Similarly, those from the HMAS Perth, who fought alongside the USS Houston created a lifetime bond of brotherhood among survivors, and interminable respect for all that served together. 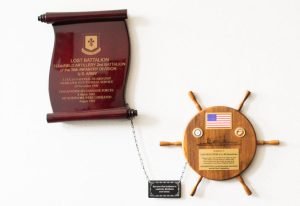 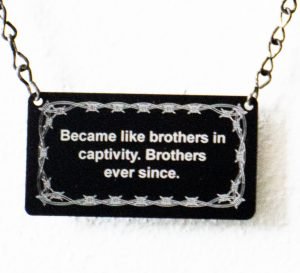